I am sincerely hoping that this long delays between posts doesn’t become a common occurrence. My computer is still out of commission and this laptop is getting slower and slower everyday. I’m surprised that it is still running at all with only 256 mb of RAM!

A great number of things have happened since I posted last. I went on a couple of local trips (more on that later), was on jury duty for 2 weeks, and worked harder than ever.

Jury duty was quite interesting! I had been called only once before and that was when I was still in college in Canada. Obviously the court didn’t want to pay for my commute and so I was able to get out of it. This time I didn’t a great excuse so I had to truck down to Oroville at 8 am on a Monday. It took all day to pick the jurors for the case and even then we still didn’t have our three alternates and we had gone through everyone in the huge group of people. So the next day we spent the whole day doing the everything again exactly the same to finish picking people for the jury. The case was an interesting one, a murder trial, but I was very grateful when it was finished. I had a hard time not thinking about the case and even dreamed about it at night. It was a very exhausting process to listen and think intensely for 6+ hours. I would come home mentally exhausted. It felt like I was doing midterms or finals all day; it was that intense.The whole trial took almost two weeks!

This was my first week back and it was rather hard to get back into the swing of things. But it was nice to be back among familiar surroundings.

I took two local trips over a couple of weekends. The first was down near Placerville with a girlfriend and some other friends to visit her fiance. We had a great time going to church and just general hanging out. I post more on that trip another time.

The weekend before last, Mom and I went down to outside of Placerville (again!) to a prayer retreat. It was a great weekend with a wonderful speaker. I learned a lot of the power of prayer and even how to pray for a closer relationship with God.

The prayer retreat was held at a summer camp/conference center at nearly 4,100 ft. We came in late on Friday night in an intense wind and rain storm and woke up to a winter wonderland the next morning with about 3-4 inches of snow. 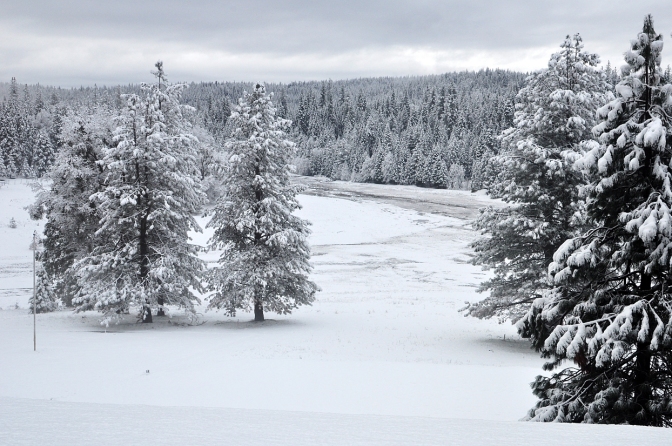 The view from our window!

A couple of Canada geese that didn’t seem to mind the snow.

We took a train ride in the snow, a first for us and for the engineer! The little snowplow is very cute.

It snowed all day Saturday and after a while we got the huge, thick flakes that I LOVE to take pictures of..

Mom looking cute all bundled up in her huge coat

I love the contrast of the dark bark against the fat snowy flakes. 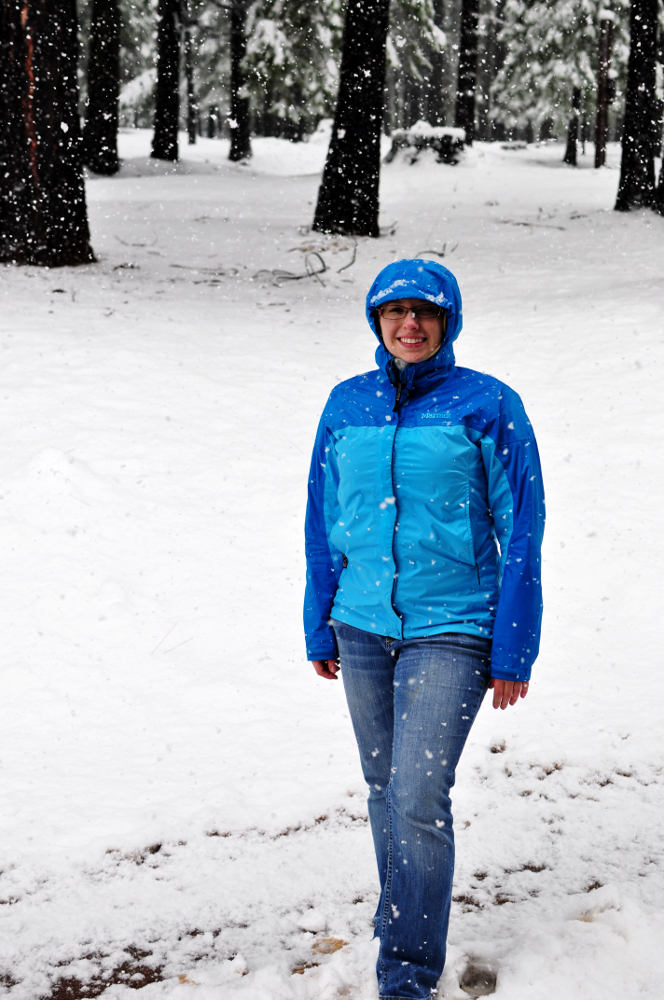 Me having a blast. Have I mentioned that I LOVE snow?

Getting ready to leave. You can see we got over a foot of snow during the two days.

A lot of snow.

2 thoughts on “A little bit of catching up to do”